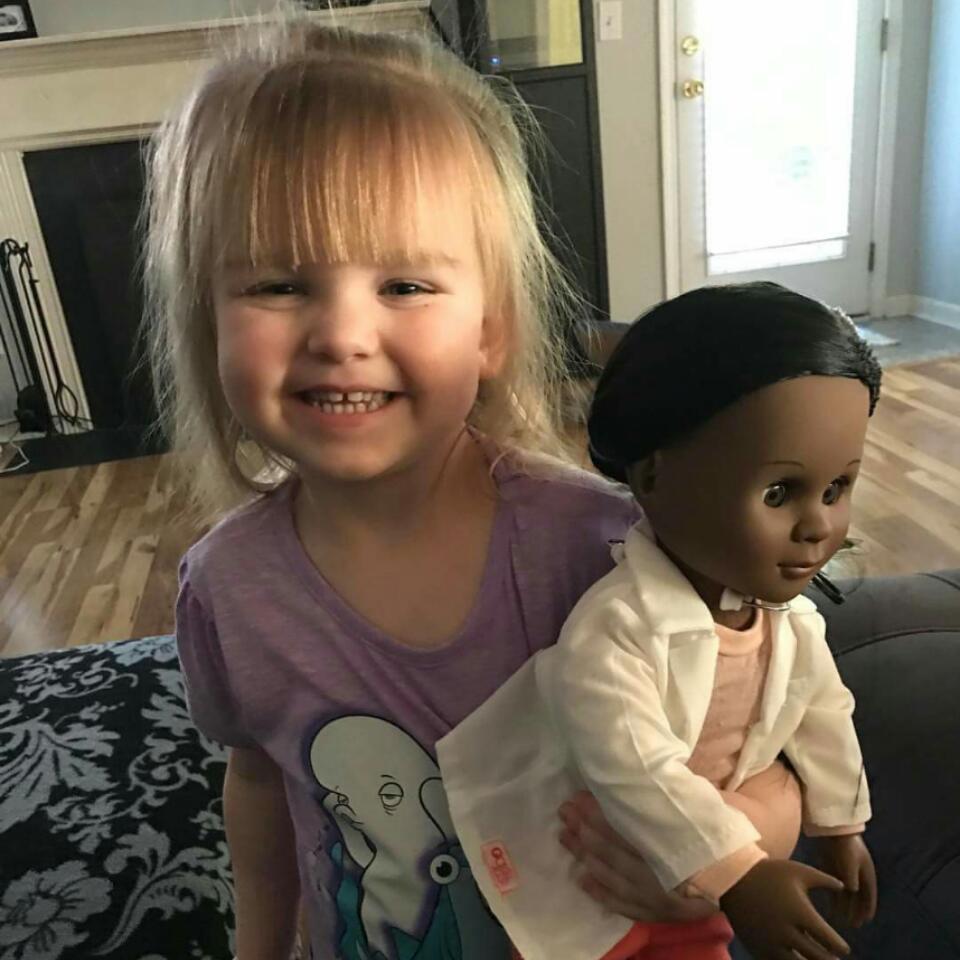 Things are really happening ooh! Some folks are openly racist in all of their ways. In this case, a little girl taught a cashier the ABCs of NOT being racist. Here’s how 2-year-old girl Sophia Benner defended her choice of a doll with different skin color.

The little girl from South Carolina is currently trending across social media after her mum Brandi Benner, shared the story on Facebook of how she and her husband Nick decided to buy their daughter, Sophia, a new doll because she finished her potty training. She picked out a brown doll and loved it not taking note of skin color. She was happy and everything was normal until the cashier at Target shockingly asked if she had picked up the ‘wrong’ doll.

Read what Sophia’s mum Brandi wrote about the incident at Target between her daughter and the cashier below:

“Nick and I told Sophia that after 1 whole month of going poop on the potty, she could pick out a special prize at Target. She, of course, picked a new doll. The obsession is real. While we were checking out, the cashier asked Sophia if she was going to a birthday party. We both gave her a blank stare. She then pointed to the doll and asked Sophia if she picked her out for a friend. Sophia continued to stare blankly and I let the cashier know that she was a prize for Sophia being fully potty trained. The woman gave me a puzzled look and turned to Sophia and asked, “Are you sure this is the doll you want, honey?” Sophia finally found her voice and said, “Yes, please!” The cashier replied, “But she doesn’t look like you. We have lots of other dolls that look more like you.” I immediately became angry, but before I could say anything, Sophia responded with, “Yes, she does. She’s a doctor like I’m a doctor. And I’m a pretty girl and she’s a pretty girl. See her pretty hair? And see her stethoscope?” Thankfully the cashier decided to drop the issue and just answer, “Oh, that’s nice.” This experience just confirmed my belief that we aren’t born with the idea that color matters. Skin comes in different colors just like hair and eyes and every shade is beautiful. #itswhatsontheinsidethatcounts #allskinisbeautiful #teachlove #teachdiversity #thenextgenerationiswatching”.

Sophia who aspires to be a doctor, was fantastic in her response to the Target cashier. Speaking on her own, she bold said: “She’s a doctor like I’m a doctor. And I’m a pretty girl and she’s a pretty girl”.

READ ALSO:   Cardi B Shares Special Message To 2020 High School And College Graduates All Around The World + Teaches Them How To Pick Classes

“See her pretty hair? And see her stethoscope?’”

The cashier after being outclassed in brilliance, dropped the talk.

Racism: How 2-Year-Old Girl Sophia Benner Defended Her Choice Of A Doll With Different Skin Color