Islamic Cleric, Pastor And Two Others Arrested In Ibadan Over Possession Of Human Parts — “I Use Human Flesh To Make Money Ritual For People And I Pay N2 ,500 For The Flesh” 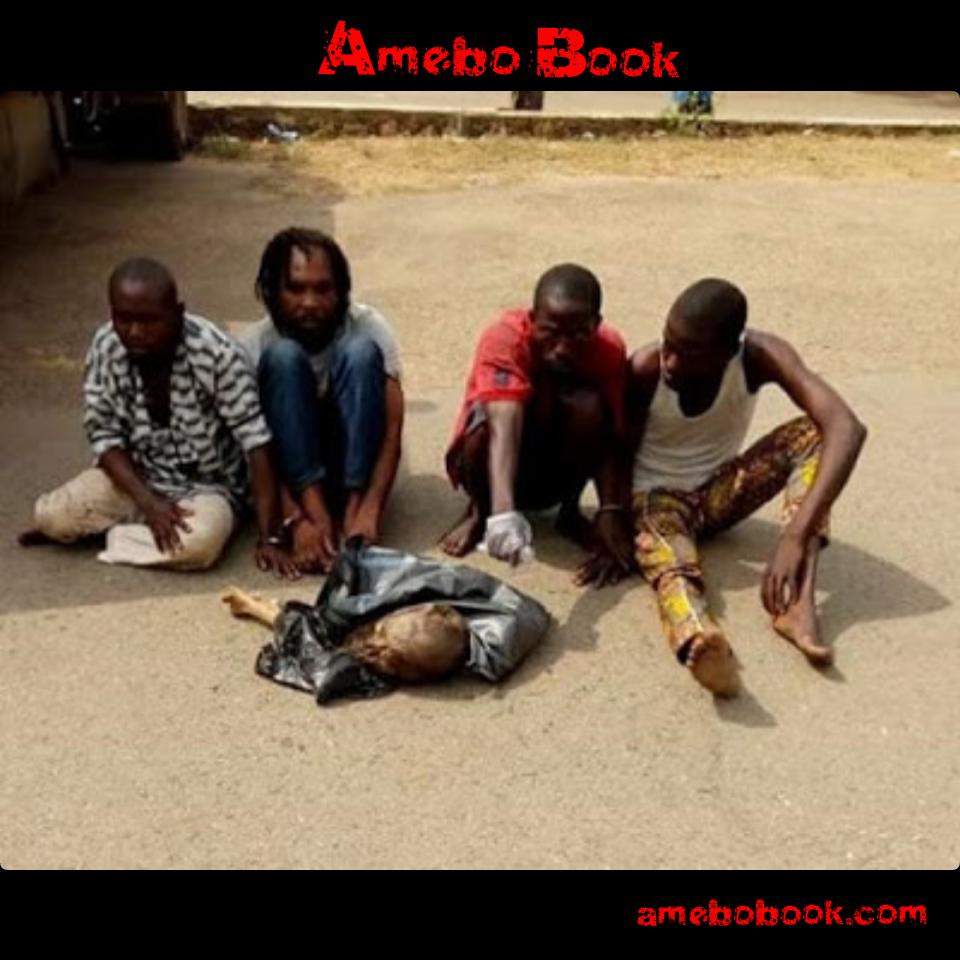 “I Use Human Flesh To Make Money Ritual For People” — Islamic Cleric, Pastor And Two Others Arrested In Ibadan Over Possession Of Human Parts

An Islamic cleric who uses human flesh to make money ritual for people, was on Thursday paraded alongside three other suspects by the Oyo State Police Command. They were identified as Alfa Sulaiman Hamed, 35, Tope Akinyele, 45, who claimed to be the pastor of a church in Ojagbo, in the Oranyan area of Ibadan. The other accomplices are Olapade Saheed, 32, and Olatunji Abiodun, 26.

The state Commissioner of Police, Abiodun Odude, while briefing newsmen at the Command headquarters, disclosed that the Alfa participated in the Fidau prayers for a dead man but later paid Saheed and Abiodun N2,500, to exhume the corpse because he needed the body parts for making money charm for his clients. It was later Saheed and Abiodun were nabbed with the deceased’s head and other body parts which eventually led to Hamed and Akinyele being arrested. The Alfa said:

“Someone introduced Saheed and Abiodun to me. I gave them N2,500 to help me find human flesh. We all met at Ayegun junction, Ibadan.”

“Around 10 pm , I took them to a grave where a body that was brought from Warri , Delta State, was buried. I took part in the prayers for the deceased before he was buried. I left them ( Saheed and Abiodun) there, but they refused to let me go. They said they wanted to sleep in my house that night. I got them a place close to my house.

READ ALSO:   Crossdresser Bobrisky Crushing On Tuface, Tells Wife Annie Idibia To Shift For Him — "Annie Should Not Kill Me"

“In the early hours of the second day, they came to me with a cellophane bag. I did not check what was inside, but I hanged it on the wall of my house. I was on my way to my office in Ile-Tuntun when I saw them in the midst of a crowd with a human head.

“I use human flesh to make money ritual for people and I pay N2 ,500 for the flesh. In this case , the charm was for myself . I did not ask them to cut off the head and it was not in my possession when the police came.”

Saheed has already admitted that they were paid N1,500 by the Alfa to do the job. He said:

“Alfa called us for a job at Ayegun. When we got there, he showed us a grave three houses away from his house. After we finished the job, he took what he needed from the remains of the dead man and asked us to dispose of the rest.

READ ALSO:   Nigerian Music Artiste Iceberg Slim Says He Does Not Care What People Say About Him And Juliet Ibrahim — "We Are Actually The Same Age And She Is Not Taller Than Me"

“We left early in the morning. But on our way , a local vigilance group stopped us and asked what was in the bag we carried. They beat us up after realising that there was a human head and other body parts in the bag. The police later came to arrest us.”

Nigerian Comedian Julius Agwu Reveals He Died But Woke Up On His Way To Mortuary, He's Dead Father Chased Him Back To The Living