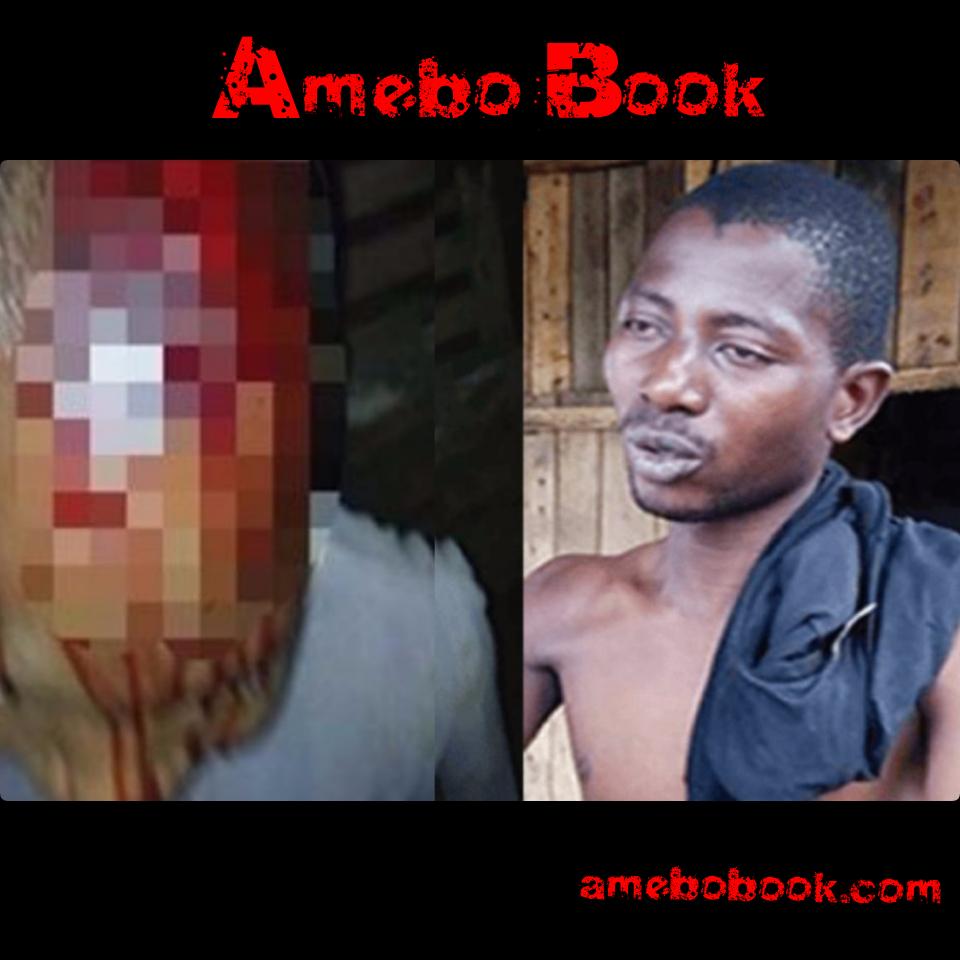 A man identified as Oluwafemi Abiodun, 35, has been arrested by policemen attached to the Airport Police Station after he broke the head of his 13-year-old apprentice with a padlock. The victim, Rasaq Alimi, was accused of tipping N200 worth of honey which eventually poured away.

Despite denying touching the bottle of honey or even pouring it away, Abiodun held Rasaq responsible for it. He broke the apprentice’s head with a padlock and ordered him to continue with his welding work, while blood ran down his bleeding head into his eyes and body.

A passer-by, Mr Sunday Oyeniyi, couldn’t stomach it after he saw Rasaq crying while working and bleeding at the same time. He took up the matter and had Abiodun arrested by the police.

It’s understood when Abiodun noticed that the bottle of honey was pouring on the ground, he walked to where Rasaq was standing and hit him on the head with a padlock. Oyeniyi who described Abiodun as a cruel and wicked person, said:

“A friend and I were coming from Ajayi Farm, at Ikeja along, when we saw the little boy soaked in blood. We quickly rushed to assist him; we noticed that his boss, who was with him, didn’t show a tinge of concern. We approached the boy and questioned him on what happened to him. He pointed to his master, who was busy working. He said that his master used an object to hit him.

READ ALSO:   "I Feel So Proud Of Myself Whenever I Wear My Own Label" - Mercy Aigbe

“We approached his master and to our surprise, he told us that he didn’t notice the blood. We reported the matter to Rapid Response Squad Police (RRS) station at the area, to intervene. Abiodun was ordered by the policemen to take the boy to the hospital for treatment.

“The following day, we went back to the workshop, to check on the boy. We were shocked to discover that he had not been treated. The master claimed that in their family, they were not allowed to take injections. He said that was the reason he didn’t take the boy to hospital after the RRS men left. In order to get justice for the boy, we took him to the hospital. We then reported the matter at Airport Police Station. The master was thereafter arrested and detained for further questioning about the whereabouts of the boy’s parents.”

Rasaq who looked malnourished and dirty looking, revealed that this was not the first time he would be beaten and injured by his master. He said:

“I was not the person that broke the bottle of honey. I noticed that the bottle was already on the ground and tried to lift it up. That was when my master accused me of licking his honey. He used a padlock to hit me on the head. I have been an apprentice at the shop, learning how to fabricate gates and some other things since January 2017. I have not seen my father since 2017′.

“The last time I spoke with my father was when he had an accident. I spoke to him through one of my seniors’ phone at the workshop. After that, I have not spoken with him. My father has also not been calling me. Since my father handed me over to my master, it is my master who has been taking care of me.”

According to Abiodun, he hit Rasaq on the head with the padlock as a lesson to him so he would desist from such an act. He claimed that it wasn’t his intention to injure him. He said:

“I beat him out of annoyance. I didn’t ask him to refund the N200, which I spent in buying the honey. I kept the honey away from him and his colleagues at the workshop. I knew they might want to lick it. But I was surprised when I saw him licking the honey. I beat him, just to correct him. I didn’t know he was injured. If I had known, I would have taken him to the hospital before the arrival of the policemen. I cannot punish another person’s son, because I have my own. I have learnt my lesson. I’m begging his father to forgive and take me out of the police cell where I am being detained.”

READ ALSO:   LOL! See The Way Lateef Adedimeji And His "Paaaadi Of Life" Woli Arole Greeted Each Other [Video]

Rasaq’s father, Mr. Adebayo Alimi, who is separated from the boy’s mother, said he took him to learn the welding work in Abiodun’s workshop but was not happy when he discovered his son was being abused. He said:

“I’m not a wicked father. I brought him to the workshop to prepare him ahead of life challenges. I knew he is still a young boy. I always send his feeding allowances to his master monthly. I stopped the monthly allowance after I had an accident. I couldn’t work anymore. My elder and younger sisters used to go to the workshop to check on him. I thank everyone who assisted him; God will protect their own children.”

Jasmine Rain Dunbar: Body Of 21-Year-Old Single Mother Discovered After Being Set On Fire By Ex-boyfriend Because He Didn't Want To Take Paternity Test

Is Shatta Wale Taking A Dig At Stonebwoy? Says "They Pretend They Have Money In Front Of Their Friends But Anytime These Friends Ask Them To Do Something For Them, They Will Say Chale Me My Money Ade Put Into Sick People"

“Spit On Me, I Am Your Tufiakwa” – Crazed Fan Tells Regina Daniels After Seeing Her Latest Photos