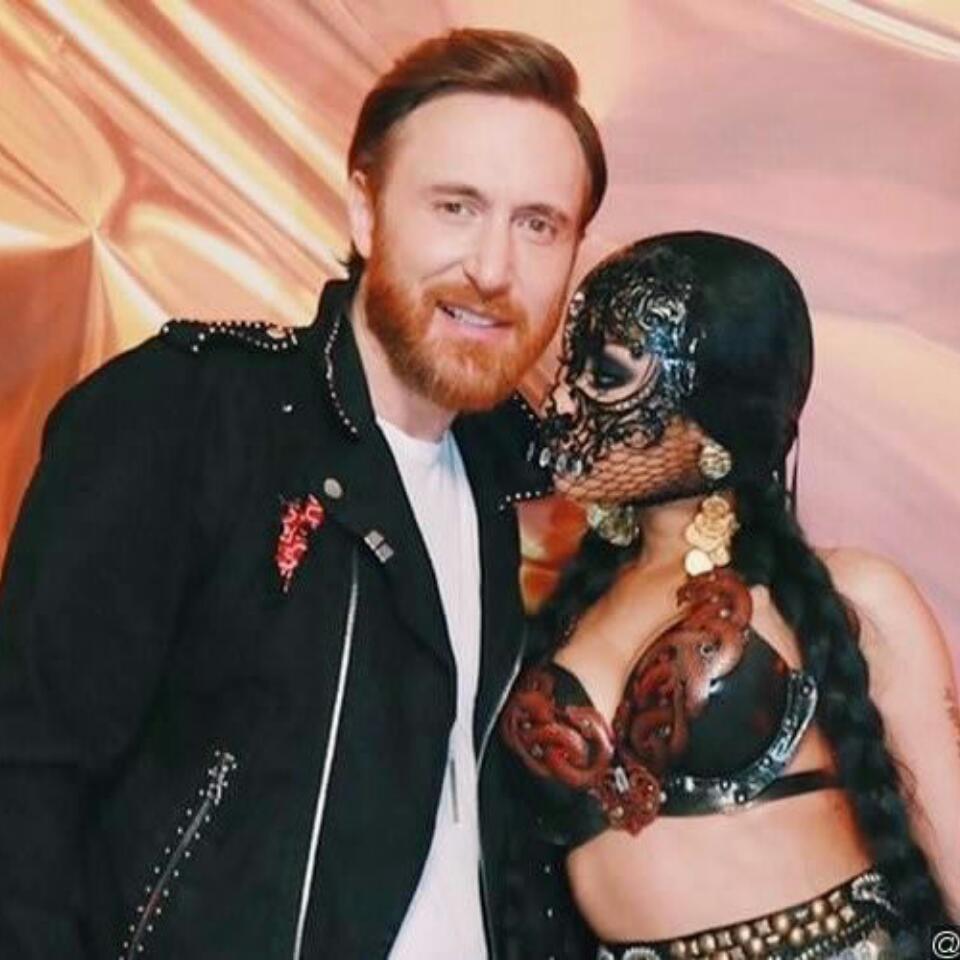 The ‘Anaconda’ hitmaker is not bashful about being sexy. Here, Nicki Minaj teases fans with provocatively sexy on-set photos for David Guetta’s ‘Light My Body Up’ music video. The rapper is reportedly filming a music video for her fourth collaboration with David Guetta, “Light My Body Up”, which also features Lil Wayne.

Nicki Minaj is seen standing next to David Guetta in one of the pics, leaning to his side rocking a skimpy two-piece with black long coat and a unique black mask, while David wears simple black jeans, black jacket and leopard-printed shoes. She did solo pics for about three others. She captioned:

“On set w @davidguetta for the #LightMyBodyUp VIDEO SHOOT waiting on @liltunechi to get here! #BarbieBackInAmerica MIAMI wuts good?!?!??!”

“#NinjaNicki #NickiDaNINJA ~ Stakes are higher than a mutha. What u wanna bet that you’ll never find another? like me. I’m once in a lifetime. Only get all of me once in ya lifetime. I’ll leave u drowning in your wet dream. Swimming in that love, surf it up in your wet dream baby, let me blow your cover, come on make me wish I was your part time lover who’s immediately got – j/k #BarbieBackInAmerica #LightMyBodyUpVIDEOshoot featuring Lil Wayne @liltunechi David Guetta @davidguetta : @grizzleemusic”.

“I am da ninja. Weezy is my sensei. So I call him Splinter. Faster than a sprinter. Gimme my chopsticks I’ll have these rap btchs 4 dinner. ~ I’ll never forget saying this line from one of my Mixtapes to Wayne maybe 8 or 9 years ago. He’s on the freestyle with me called Go HARD. it was my first time listening to it WITH him in the same room. Same studio right here in Miami. He looked me dead in the eyes and in that (whisper voice), he smiled & said “I fuk wit it Nic, but the only thing is that… Splinter was a RAT. And we don’t FUK wit no RATSSSSSSS”. – FKN GOAT @liltunechi YOUNG MONEY TIL DA DEATH OF ME!!!!!! #NoFrauds #NoSnitch Why do niggaz claim the streets then act just like the law? Riddles that I can not seem to solve, man “.

In a Q & A session about “Light My Body Up” on Twitter, Nicki Minaj admitted that Lil Wayne was not part of the original plan. She asked him to join her in the track without David knowing which surprised the French DJ. According to Nicki Minaj, it took her only 15 minutes to write her rap verse in ‘Light My Body Up’.

Cheryl And One Direction's Liam Payne Have Welcomed Baby Boy. See The Photo