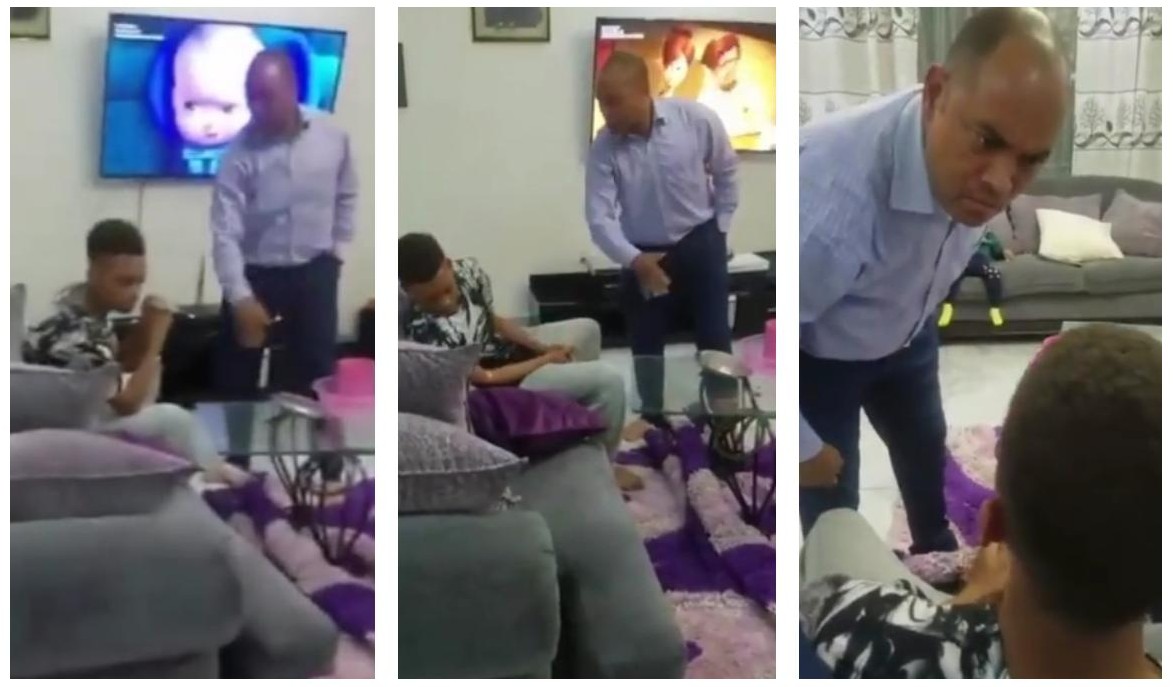 Nigerians have reacted to the trending video of a Zambian father who was seen angrily scolding and slapping his son over poor grades. The man who has been identified as George Bester of Kitwe, reportedly spent $21,680 (8,479,698.40) on tuition fees only for the boy to get poor grades in eight subjects in his exam at the American International school located in Lusaka, Zambia.

According to the results of the exam posted online, the boy was absent during English Language and Mathematics exams. However, he got an A grade in Music but failed the remaining four subjects.

In the video, the boy’s mother is heard begging her husband to stop as she records him but he continues to scold and beat his son.

Meanwhile, the police in Lusaka have summoned Mr. Bester to appear for investigations. It’s understood a police call-out by the Child Protection Unit dated 20th April, 2020 was issued summoning George to report immediately.

— TRENDING VIDEO : Father Unleash Ultimate Anger On His Sons After Paying $21k Tuition Only For Them To Fail Woefully In Exams.

– The kids also failed to write their Maths and English exams, and the school located in Lusaka, Zambia cost over $21,000. pic.twitter.com/yBeEJbtDHZ

Reactions from Nigerians below.

21K USD per term. He failed. Skipped classes. Had the effrontery to bring the result home, he didn’t turn himself in at an orphanage home. He sat down majestically watching TV. But the father is not right beating him.

Na vibes and insha allahu full some of una head.

My dad gave me 1,000naira to buy Understanding Mathematics and I didnt give him his 300 change. Result came out and I failed Maths

My dad put me inside a drum, rolled it in the compound and asked me to be shouting “I AM A THIEF”

You pay 21k USD for a child – a whole 8 Million naira. He is absent in English and Maths and failed the rest of his subjects…and you say that small roughing up is too much? I should talk to him instead?

In this life, never negotiate with a terrorist, even if he is your son.

Kid had a distinction in Music and he wants to be a musician.

This family would make a fire album with lots of tours and awards! Perhaps the Grammy 🥇

Forget about Boobs and Ass for a moment. Your kids deserve a Mom who can teach them further maths and English language.

How can you be paying 21k usd for tuition and your kids can’t pass any of the two major subjects?

You failed Maths amd English but passed Music after Paying 21k USD ?
Omo it’s there you will start writing music
And if you don’t blow, I’ll blow you
Just know blow must happen

After paying 21k USD? I swear my papa go arrest me

READ ALSO:   Oga Free Your Tummy Abeg.. Na Big Belle You Get You No Kill Person - Observer Tells Dino Melaye As He Pushes His Stomach In While Posing With His Rolls Royce [Photo]

Click Amebo Book for all the latest news today!