“Are you scared now, you liberal cunt?” – Women Begin Reporting Strangers ‘grabbing them by the p***y’ After Donald Trump Election Win 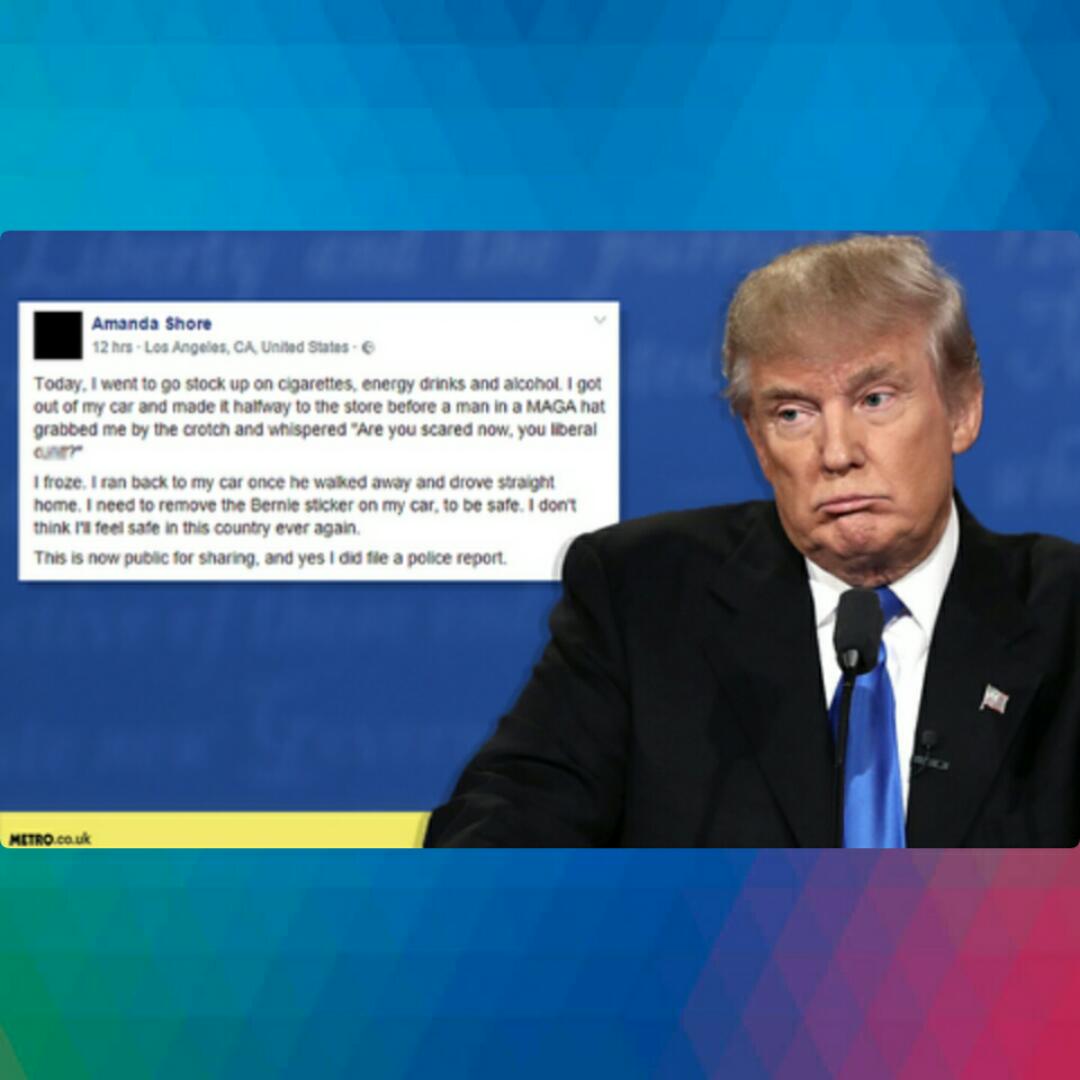 Like you already know by now, Donald Trump has seen off Hillary Clinton to become President-elect of the United States. This victory has triggered hooliganism from some men who now sexually assault women. One of such victims is Amanda Shore who was grabbed by the crotch by a man. She took to social media to share her experience which has since gone viral.

‘Today, I went to stock up on cigarettes, energy drinks and alcohol,’ Amanda Shore wrote.

‘I got out of my car and made it halfway to the store before a man in a MAGA hat grabbed me by the crotch and whispered, “Are you scared now, you liberal cunt?”

READ ALSO:   Choi! Nollywood Actor Mike Godson's Epic Reply To Follower Who Begged Him For Money — "Go And Ask Davido For Help He Has 30 Billion In His Account"

‘I froze. I ran back to my car once he walked away and drove straight home.’

Amanda Shore had been sexually assaulted by a man in a ‘Make America Great Again’ hat. Her attack follows an audio leaked during the election campaign, Trump infamously remarked that he would ‘grab ’em [women] by the pussy’.

Also, another African-American woman, Ashley Boyer, wrote that she was racially abused while filling her car up with petrol. She was called the n-word by her attackers who said they would shoot her if there weren’t people around.

‘Just experienced one of the worst things in my entire life,’ Ashley wrote. ‘While pumping gas, I had a vehicle pull up beside me. Out jumps four males, all of whom are Caucasian.
‘They then proceed to talk about the election and how they’re glad they won’t have to deal with n*****s much longer.

‘Now me being by myself, I just kept quiet – until one walked over to me and said, “how scared are you, you black bitch??? I should just kill you right now, you’re a waste of air!”
‘Still, I said nun, I kept my head down. He then proceeds to say, “What, are you deaf or something you n*****??”

‘Then another guy steps out and shows me his firearm. He says, “you’re lucky there’s witnesses or else I’d shoot you right here”.
‘By now there’s tears, full-blown tears. They leave. I have called the police, but I am shaken, upset, and confused.
‘Is this what America is going to be like from here on out??!!’

These are just two cases of sexual assault by criminals hiding under the guise of Donald Trump victory. More stories will flow except things begin to happen to check this menace before it wrecks further havoc.

I Have The Dopest Kids In Africa – Omotola Jalade Declares, Rita Dominic Reacts

Dr. Donald Okechukwu Ozumba: Married Nigerian Surgeon Has Been Arrested In The US For Sexual Assault

“I feel so defilled and dirty rn, some men are such shameless creatures” – Angry Lady Tells On Man Sitting Next To Her In Bus Who Was Rubbing His Bare P*nis On Her