Suspected Cult Members Have Confessed To Selling Human Hands For N5,000 Each In Ogun State 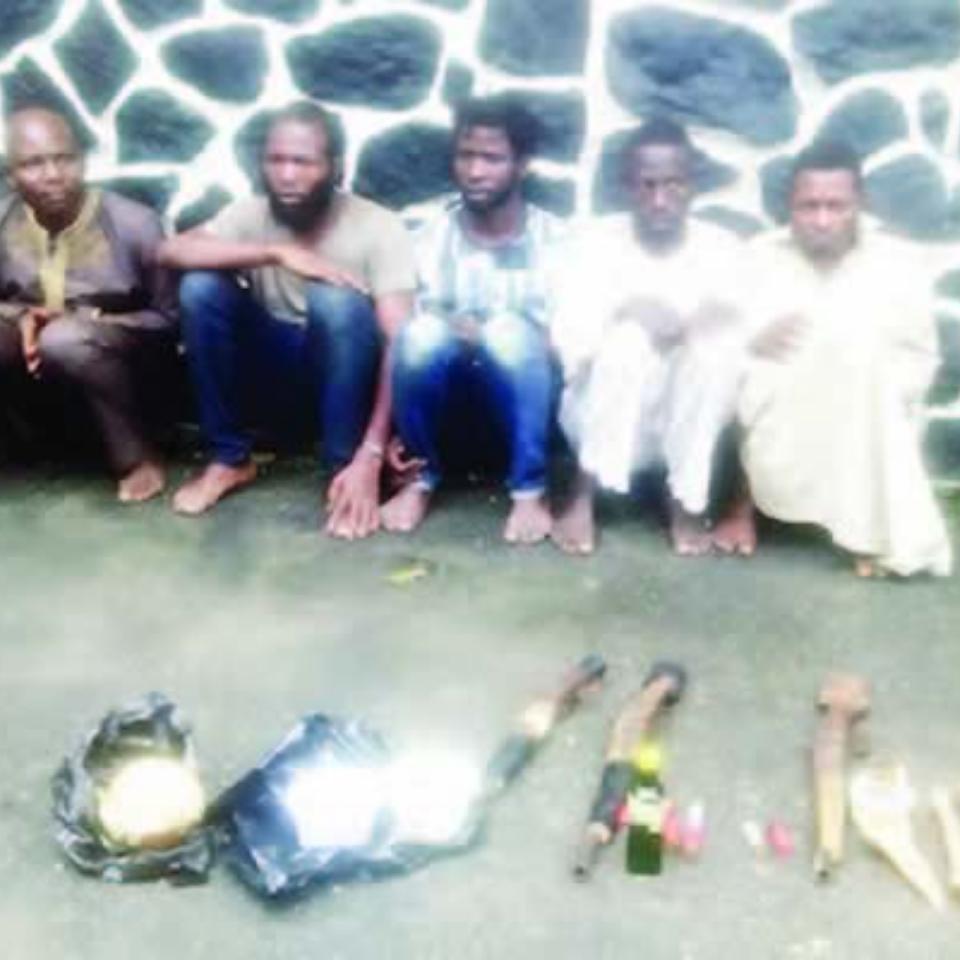 Evil Men:Suspected Cult Members Have Confessed To Selling Human Hands For N5,000 Each In Ogun State

Two men suspected to be cult members, have confessed to selling human hands for N5,000 each to raise funds for their operations. The suspects who have been identified as Oluwaseun Odueh, aka Cleff; and Wasiu Adejumo, aka Bomber, are reported to be members of the Eiye Confraternity. They were were arrested by operatives of the Zonal Intervention Squad in the Ibogun area of Ogun state.

The men who have also been accused of being robbers, were arrested alongside a traditional ruler who allegedly bought the hands of the victims. Three herbalists who gave their names as Ifatona Akanni, aka Ajana Oro; Isiaka Ajani and Oko Musa were also arrested along with the other suspects.

According to the herbalists, they bought seven hands from the cult members for N5,000 each. A certain Tunde who was killed by the men, was beheaded at the Cherubim and Seraphim Church Railway Line, Ogba Ayo, Ijoko, in 2016, with his two hands cut off. Also killed were one Lateef, Kehinde and Yinka, in the Ijoko area between 2016 and January 2017. The hands of the men were cut off.

On May 28, 2017, three men were also killed at Candozo Hotel, Fadahunsi, Ijoko, around 8pm, while in June 2017, two people were killed at Ogba Ayo Junction and Agoro Junction, Ijoko, with their hands missing, according to the police. One of the suspected cult members, Odueh, said all the victims were members of the Aiye Confraternity, a rival cult, adding that they were killed during reprisals. He added that their hands were sold to herbalists to raise funds for the activities of his gang. He said:

“Supremacy clashes between the cults started about six years ago in Ijoko. The Aiye cult killed our members, Godogodo, Fele, Callous and others. Each time they killed them, they cut off their hands. We had to retaliate by doing the same thing to them.

“Initially, we were throwing away the body parts. But when we realised that we needed money for our activities, we decided to make enquiries on what we could do with the body parts. That was how we started cutting off their hands and selling them. I have been involved in the murder of four members of the rival cult.”

The 32-year-old said he chose to become a cult member as a result of the oppression he suffered as an undergraduate of a university in Ogun State. He also added that he joined the gang in his community when he finished from school.

READ ALSO:   Davido And Hushpuppi Feud: Eniola Badmus Has Come For Hushpuppi And Questioned His Source Of Income After His Attack On Davido

The second suspect, Adejumo, 30, confessed he was an Internet fraudster (yahoo yahoo). He added that he was part of the squad that killed two members of the Aiye cult he identified as Kehinde and Lekan Welder. He said that a fight between two leaders in the Ijoko area led to the increase in cult killings in the community.

“We killed Kehinde and Lekan Welder because they killed our members and cut off their hands. They killed Fele (Sunday) and Callous, a final year student of the Federal University of Agriculture, Abeokuta. They also killed Godogodo and Rati. We sell the hands to herbalists,” he added.

According to one of the herbalists, Musa, he bought three hands from the cult members. He admitted to have paid N10,000 while owing them N5,000 balance. He said:

“I am a herbalist. I also consult Ifa and Opele for my clients. I met these boys when they came to worship Ogun at my shrine and since then, they had sold only three hands to me; both dry and fresh. I use the hands for asiri bibo (fetish blessing). I bought each hand for N5,000. I gave them N10,000, and owed a balance of N5,000.”

The second herbalist, Akanni, 53, admitted he bought two hands from the men for the same purpose.

The third herbalist, Ajani, who is the baale of Ososun village, in the Ifo Local Government Area of Ogun State, claimed the cult members introduced themselves to him as land speculators. He also added that he bought two hands for N10,000.

The Zone 2 Police Public Relations Officer, SP Dolapo Badmos, said Odueh was the first to be arrested. She said:

“Odueh was arrested on August 23 by the ZIS team during a patrol at about 2pm in the Ibogun area of Ogun State. On interrogation, he confessed to belonging to the Eiye Confraternity and said he was also a member of an armed robbery gang. We subsequently arrested other members of the gang.

“The police recovered three locally-made cut-to-size guns, seven live cartridges, and human parts processed into concoctions and powder for fetish use from the suspects.

“The Assistant Inspector-General of Police, Zone 2, Adamu Ibrahim, has ordered that the suspects should be arraigned in court.”

Nabbed:Suspected Cult Members Have Confessed To Selling Human Hands For N5,000 Each In Ogun State